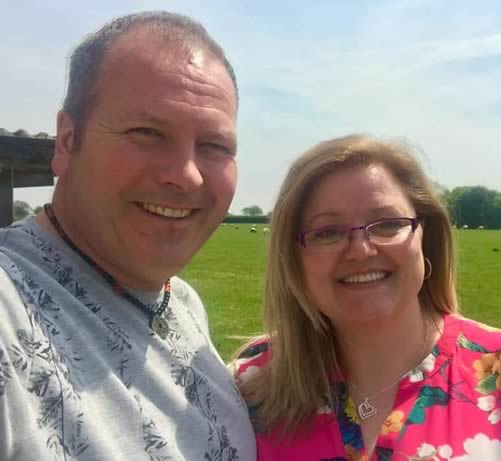 Tracy has suffered with bouts of anxiety and depression since she was a teenager and exhausted a range of treatments seeking help. She tried traditional counselling, psychotherapy, CBT and medication; followed by more “complimentary therapies”, including; hypnotherapy, acupuncture and reiki, but when the doctors eventually suggested electric shock therapy, Darren stepped in. They decided there had to be an alternative solution.

Tracy sought the services of a professional life coach, which was a turning point in her journey. For the first time ever, a professional was asking her to focus on what she wanted to feel as opposed to how she didn’t. Although they were focussing on Tracy, Darren found the solution to his own bouts of anger/rage, overwhelm, stress, frustration and procrastination along the way. They experienced a positive change straight away, and so went on to study positive psychology and both became accredited Life Coaches and NLP practitioners and also attended many personal development workshops and courses around the world. Although these were always positive, Tracy found after a few weeks/sometimes months, that she would experience a crash, losing her enthusiasm and experiencing a return of those familiar negative feelings.

“I must be really ill” because “nothing ever works for me long term.”

Then finally they discovered Richard Wilkins and Liz Ivory with their course Broadband Consciousness and it was nothing like anything else they’d ever learnt. Tracy attended The 5 day course and found it to be life changing. She became calmer, more relaxed and happy in herself. She was back to the old Tracy. Darren really noticed the difference and decided to attend the course himself. Though he’d never suffered himself with anxiety or depression, he did have his own “go to” negative emotions like stress, overwhelm and sometimes anger.  Darren says; “by the end of the five days I felt like I’d actually met myself for the first time.”

They had to share this knowledge, so they chose to study with Richard Wilkins and Liz Ivory at the Ministry of Inspiration and became qualified to deliver the one day Broadband Consciousness course themselves.

They now help people to understand that it’s ok to not always feel ok, that the negative feelings you are experiencing are not who you really are and that you can choose how you want to think and feel each day and you can live a life that you truly deserve.

He is down to Earth, light hearted and spiritual, and places value on simplicity, fairness, connection, freedom, creativity, integrity and fun.

Together they have two grown up children; Danny and Bailey, two dogs; Wiggly and Pebbles and Gizmo, the black cat.